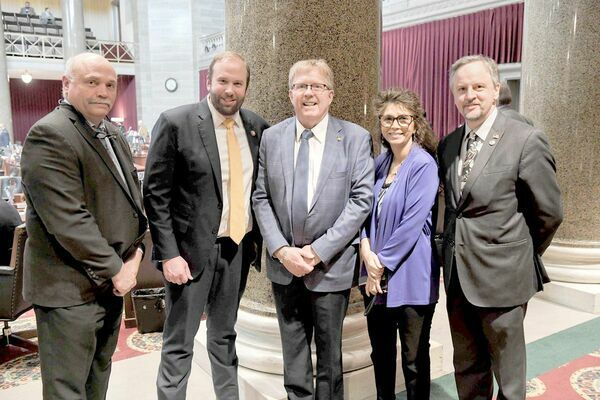 Hope everyone had a great Easter with your families. The legislature observed Easter on Monday, but despite the shortened week we expected to consider a host of bills.

I was happy to help pass a budget last week that included major pay raises for corrections workers. These increases will be substantial. As an example, in 2017 the starting pay for Corrections Officer-I positions was $29,268. Under the proposed budget, starting pay will now be $36,000, an increase of 23% in just five fiscal years.

I would like to again commend the Washington County Health Department and the Washington County Ambulance District for their continued efforts to ensure vaccine availability for local residents. Those who have not been vaccinated and are in Missouri’s current qualified tiers, have three options to get the Moderna vaccine. You can go online and register at https://washco-covid19.com/; call the health department at 438-2164; or fill out an application at the health department, 520 Purcell Drive in Potosi. The ambulance district is working to ensure even homebound residents can get safely vaccinated upon request.

The members of the Missouri House gave their stamp of approval to the appropriations bills that make up the Fiscal Year 2022 State Operating Budget. Members spent more than 7 hours on the House floor Tuesday as they discussed and amended the 13 bills that contain more than $32 billion in funding.

With the spending plan for the upcoming fiscal year, the House once again prioritized funding for K-12 education. The budget makes a record investment in K-12 education as it once again fully funds the School Foundation Formula. In total, elementary and secondary education will receive $8,071,696,005 in funding.

• $4.8 million to provide behavioral health supports for children in foster care and their families

• $3.9 million for a rate increase for respite services for foster and adoptive families

• $1.3 million increase in support for Infant Care expenses for kids in foster care

• $1.2 million increase in funds for clothing allowances for children in foster care

The Fiscal Year 2022 budget approved by the House saves approximately $2.2 billion in funding when compared to the budget recommended by the governor. That difference is in large part because of the decision to not allocate approximately $1.9 billion in funding to expand Medicaid eligibility. The House Budget Chairman asked his colleagues to vote against expansion of Medicaid “for able bodied adults, many who choose not to work.” He noted that by rejecting expansion, the House “can now prioritize other programs for funding increases that will make a tremendous impact across the state.”

The Budget Chairman has recently filed legislation to make use of the funds saved by rejecting the expansion of Medicaid. He said the bill will “use these funds to support seniors in nursing homes and to provide care for the developmentally disabled. It will also expand mental health programs, add public defenders to the criminal justice system, and boost K-12 school transportation funding. In short, this bill will support the most vulnerable Missourians.” The House is expected to take up the bill for consideration in the weeks ahead.

Other highlights of the FY 2022 budget include:

• $2.5 million to boost reading literacy in the St. Louis area

• $50,000 for tutoring and other educational programs at the W.E.B. Dubois Center in Kansas City

• $67.5 million in restored funding for four-year public institutions that was previously lost due to the pandemic

• Increases to all four of the state’s primary scholarship programs: A+, Bright Flight, Access Missouri, and Fast Track

• $500,000 to Harris-Stowe State University to begin an entrepreneurship program

• $1.6 million for improvements to weigh stations across the state

• $541,047 to increase the assessment maintenance subsidy that county assessors receive to $3.15 per parcel

• $5.3 million for “Raise the Age” for the Division of Youth Services to provide services for children age seventeen who are engaged in the criminal justice system

• Another $13.2 million for the judicial branch to handle “Raise the Age” cases

• $671,714 in funds to convert Crossroads Correctional Center into a training academy for incoming correctional officers

• $2.5 million for a recidivism reduction program that works with recently released prisoners

• $134.1 million in federal stimulus funds for the Department of Health and Senior Services to continue coronavirus mitigation efforts

• $146.7 million in total funds to increase reimbursement to those providers who take care of Missouri’s developmentally disabled population

The appropriations bills now move to the Senate for consideration. The two chambers will need to agree on a final version of the state spending plan by May 7, which is the constitutional deadline for budget approval.

Other Bills Sent to the Senate

HB 387 defines "restraint" and "seclusion" and requires school districts, charter schools, or publicly contracted private providers to include in policy a prohibition on the use of restraint and seclusion, including "prone restraint" as defined by the bill, for any purpose other than situations or conditions in which there is imminent danger of physical harm to self or others. Supporters say the bill is much needed and that seclusion and restraint techniques often cause trauma. Most districts properly use techniques and this bill will help ensure that all will be required to implement better policy. Supporters indicate that 30 other states have similar policies and research indicates the practice of seclusion and restraint do not improve a student's academic performance or behavior.

HB 529 establishes the "Missouri-Made Fuels Act", which specifies that all diesel fuel sold or offered for sale in Missouri for use in internal combustion engines must contain at least the following stated percentage of biodiesel fuel oil by volume on and after the following dates: (1) April 1, 2023, until March 31, 2024 – 5 percent; and (2) Beginning April 1, 2024 – 10 percent. Supporters say biodiesel was invented in Missouri and over 200 million gallons are produced in the state each year, but much of it is exported to other states. Biodiesel is a low emission diesel fuel option that can help Missouri meet the renewable fuels standards. This bill would provide for a roll out of a statewide biodiesel fuel standard that would create jobs and grow the state's agricultural economy, while providing an environmentally friendly fuel option.

HJRs 23 & 38 proposes a constitutional amendment to assert the right of Missourians to hunt and fish. Upon voter approval, this proposed constitutional amendment guarantees the right of hunters and anglers in the state to engage in hunting and harvesting wildlife and fishing using traditional legal means, subject to duly authorized powers of the Conservation Commission. Supporters say the resolution, if passed by the voters, would enshrine the right of Missourians to hunt and fish for future generations. Hunting provides food for many Missourians and also serves the state in predator and disease control.

HB 69 changes the law regarding the sale of metals. Currently, every purchaser or collector of, or dealer in, junk, scrap metal, or any second hand property is required to maintain written or electronic records for each purchase or trade in which certain types of material are obtained for value, and there are some exceptions to that requirement. This bill repeals the exception to the records requirement for any transaction for which the total amount paid for all regulated material purchased or sold does not exceed $50, unless the material is a catalytic converter. The bill also specifies that metal that is a minor part of heating and cooling equipment will not be subject to the exception to the law requiring records to be kept for each purchase or trade of the metal. Supporters say copper theft continues to plague areas across Missouri, and people will go through sheetrock and go through anything to get to the copper and it causes a lot of damage. The bill requires a photo ID to be copied when there is a sale of copper. It is currently only for a transaction of $50 or more that it needs to be copied. The issue is that people get around this dollar limit by splitting their sales to stay under $50. There is currently no way to track small sales and this bill closes that loophole.

HB 202 designates August 31st of each year as "Random Acts of Kindness Day" to mark the beginning of Suicide Prevention Awareness Month in September. Citizens are encouraged to celebrate this day by engaging in small acts of kindness that can change the course of a person's life. Supporters say suicide impacts everyone, and many people are struggling. This day will help bring more attention to the problem of suicide and hopefully become contagious in creating positive community events.

SB 2 modifies the Missouri Works program to provide that, for qualified military projects, the benefit shall be based on part-time and full-time jobs created by the project. Supporters say the bill will authorize the counting of part-time National Guard positions for the Missouri Works program which will increase tax credits to employers that create and support military personnel. The bill may also help members of the military obtain insurance benefits. The bill fixes an oversight and adds part-time military jobs to a tax credit calculation so that it will function as originally intended.