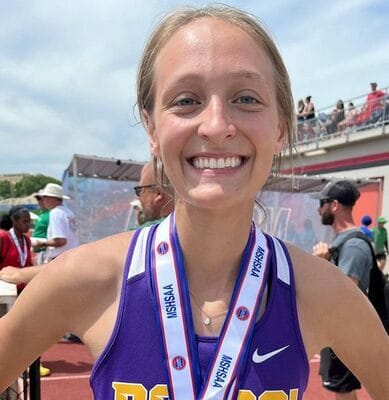 McCAUL IS STATE CHAMP! – Annie McCaul claimed the State Championship for Class 3 in the 300 Meter Hurdles at Jefferson City along with 2nd Place in the 100 Meter Hurdles. McCaul, a Potosi Senior, qualified for the State Track Meet in 4 events. She is the daughter of Alex &amp; Judy McCaul, Potosi Route. Congrats, Champ! (School Photo) 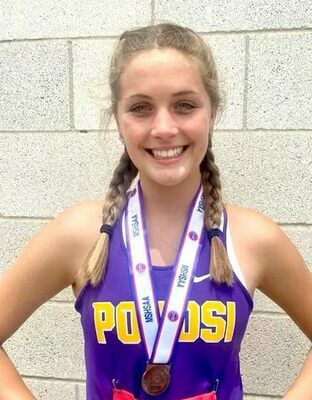 The Trojans fielded three relay teams, two for the ladies and one for the guys.

In individual events, the Trojans had Annie McCaul leading the way with entries in 3 different races. Senior McCaul was in 100M and 300M Hurdles as well as the 200M dash. McCaul qualified in 4 State events.

Kaydence Gibson qualified in Pole Vault along with the 4x800M Relay.

In field events, Nora Henry was in the field for Shot Put. Ava Robart was in for High Jump and Kalie Thompson was in for Discus.

J.T. Cross and Landon Sprous both were in Hurdle events. Cross was in the 300M race and Sprous was in the 110M event.

The Trojans left Potosi with a police escort through downtown at lunch time on Thursday, May 26th headed to Jeff City. The State Track Meet was held at Jefferson City High School.

Annie McCaul claimed the State Championship in the 300 meter Hurdles on Saturday, May 28th. She also was 2nd in the 100 meter Hurdles. Ms. McCaul also was 14th in State in the 200 meter dash.

Kalie Thompson, a Junior, took 4th in the State in Discus for Class 3.

Coach Amanda Politte said, “We’re proud of them all! (They’re a) great group of kids!”

The Trojans closed out their Spring Sports season with their annual banquet that was held on Tuesday, May 31st at the high school.