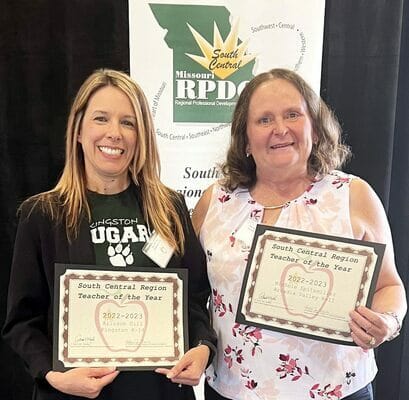 Kingston High School science teacher, Allison Gill, is a recipient of the 2022 South Central RPDC Teacher of the Year Award. The Missouri Regional Professional Development Center (RPDC Rolla) recognized the top 20 candidates out of 443 teachers nominated, and Gill was one of only two winning recipients on Thursday, June 23rd. Michele Spitzmiller from Arcadia Valley R-II was the other recipient from this region. Both teachers represent Mineral Area Activities Association (MAAA) Small Schools.

The purpose and process behind the DESE "Teacher of the Year" program is "to focus public attention on excellence in teaching and to honor classroom teachers in all regions of Missouri.” The application process includes submitting three essays and a resume. These essays focus on what influenced you to become a teacher, a lesson or unit that defines you as a teacher, and how you collaborate with colleagues and community to build a culture of respect and success in your school district. Everything is submitted to a "a regional selection committee composed of individuals from the teacher organizations; administrator organizations; and higher education.”

In early May, Gill received an email from Kingston K-14 School District Superintendent, Dr. Lee Ann Wallace, stating that she got a call from the Department of Elementary and Secondary Education (DESE) saying that she had been nominated for South Central Regional Teacher of the Year.

“The nomination process is anonymous, so we had no idea who had submitted it, but she was very proud and excited. May is an extremely busy month with EOC testing, the Athletic and Activities Awards Ceremony, and all of the graduation events, so I honestly didn't give it much thought. I was definitely honored by the nomination, but I just didn't have an extra minute to explore it further,” said Gill.

“By the end of May, I received an invitation for training on the application process for becoming Regional Teacher of the Year. The training was led by RPDC (Regional Professional Development Center) Consultant, Janet Creek and the 2021 South Central Regional Teachers of the Year, Regina Moyers (Potosi) and Melissa Ziegler (Washington). I learned more about the application process and the three essays that were required for the selection process. So I got busy writing essays,” she said.

“Full disclosure, when I was first nominated in early May and was so crazy busy, I thought what teacher could possibly have time to do this and still be considered worthy of a title like Teacher of the Year. Once summer break began and the dust and the nerves settled, I started to reflect on the essay themes and I found the process to be very cathartic. I truly felt like writing those essays would make me a better teacher, because it reminded me of why I decided to be a teacher, and all of the ways that I try to impact my students,” said Gill.

The South Central Teacher of the Year banquet was held at the Hassellmann Alumni House in Rolla. It was hosted by the South Central RPDC Director, Dr. Aaron Zalis, and attended by DESE and RPDC representatives. When it was time to announce the winners, the first name called was a former colleague of Gill’s, Michele Spitzmiller, from Arcadia Valley High School.

“Michele and I got to know each other when I first started my teaching career at AV as a paraprofessional. The funny thing is that she messaged me the night before the banquet and said, ‘It would be awesome if we both won!’ So, when my name was called right after hers, I was just floored. Having us both win this title together was like icing on the cake, and seeing the expression on both Dr. Wallace’s and my son Stone's face was just the best,” said Gill.

“I have since found out that it was a student who submitted my nomination for teacher of the year, and knowing that really amplifies the meaning behind all of this. I am forever grateful for that student who challenged me and made me a better teacher. Having won the title of Regional Teacher of the Year definitely adds a level of responsibility to continue to increase my knowledge and abilities as a teacher. I'm looking forward to the opportunities ahead that come with this title and I'm ready to get started on the next three essays to compete for Missouri State Teacher of the Year. It would be great to bring attention to our region and to our small, Kingston K-14 School District.”