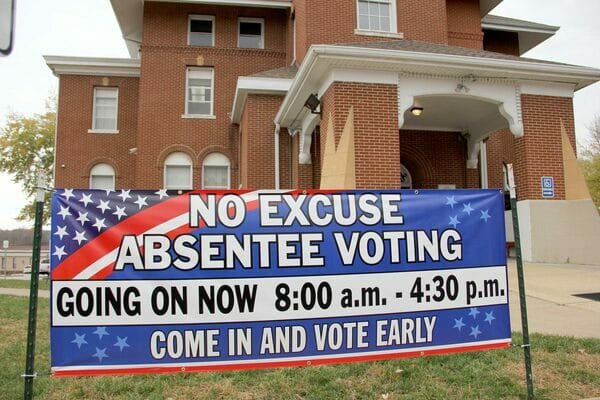 NO EXCUSE VOTING –– The Washington County Courthouse will open Saturday, Nov. 5th from 8 a.m. to Noon for early voting. The 2022 General Election is to be held on Tuesday, November 8, 2022 all across Missouri. Voters may go to the Polls from 6 a.m. until 7 p.m. on that date to express their desires for who is to fill the various political offices which will appear on the ballot.

Washington County votes will be tallied in thirteen Precincts and for the Absentees.

At the Federal Level votes will be cast for U.S. Senator and 3rd District U.S. Representative. Statewide voting will be for State Auditor.

On a more localized level there is a contest for the 118th District State Representative and in County voting for Prosecuting Attorney.

A look at the ballot (see elsewhere in this issue) shows: (Listed are contested races only!)

Also on the Tuesday, November 8th General Election Ballot will be three Constitutional Amendments brought by the General Assembly, an Amendment by Initiative Petition, the Judicial Ballot seeking input on retention of six Judges and the Constitutional Convention question submitted by Secretary of State Ashcroft.

Amendment 3- Remove state prohibitions on purchasing, possessing, consuming, using, delivering, manufacturing, and selling marijuana for personal use for adults over the age of twenty one; require a registration card for personal cultivation with prescribed limits; establish a lottery selection process to award licenses and certificates; issue equally distributed licenses to each congressional district; and impose a six percent tax on the retail price of marijuana to benefit various programs.

Amendment 4: Authorize laws, passed before Dec. 31, ‘26, that increase funding for a police force established by a state board of police commissioners to ensure such police force has additional resources to serve its communities.

Constitutional Convention: Shall there be a convention to revise and amend the Constitution.

Absentee voting is now open for all registered voters and continues until Monday, Nov. 7th, 2022.

Take the time to vote and express your opinion in 2022.