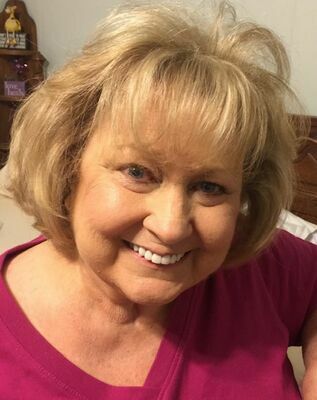 Linda Sue Reed of Dillard, formerly of Desloge, was born February 26, 1949 in Bonne Terre to Henry and Juanita (Eaton) Bohnenkamp.

On July 13th, 1968 she was united in marriage to Michael R. Reed, a love story that would span nearly 53 years. To this union 2 children were born, Christopher (Denise) Reed and Julie (Shawn) Pratt. Shawn and Denise were not son in law and daughter in law to her, they were her children as well.

She was raised in Desloge with her sister and 3 brothers and she was a the social butterfly. Sue and her sister Cyndi were inseparable, not just sisters but best friends. Her brothers, Eddie, Steven and John were also very important to her and they are all a very close-knit family.

Sue, as a young lady, worked for her uncle Marvin as a dental assistant in Flat River. After her marriage she worked as a telephone operator in Rolla, but her true passion was shopping. She never let a good deal pass her by. She loved to see the joy in people’s faces when she gave them a gift. Her swimming pool was her “happy place” and she enjoyed sharing it with her grandkids and great grandkids, where many wonderful memories were made.

So many things could be said about Sue. She was not a good grandmother but a GREAT grandmother. If you ever came across her you know about her beautiful smile and infectious laugh. She was not only a beautiful lady on the outside but on the inside as well. She had a heart of gold and she always instilled in her children and grandchildren to first and foremost be kind to others. She knew Jesus Christ as her Lord and Savior and shared her faith with her family and friends. She was a long time member of First Baptist Church in Viburnum.

In 2014 Sue was involved in a car accident that nearly ended her life. Her entire family and group of friends pulled together to help her recover. She beat the ventilator and a broken body. She was bound to a wheelchair the last few years and Mike cared for her every need, proving daily his love and devotion.

She is survived by her devoted loving husband Michael Reed of the home in Dillard. son Christopher and wife Denise of Potosi, daughter Julie and husband Shawn of Dillard. grandchildren Hannah Reed, Ted (Chelsea) Reed, Lindsey (Danny) Guinn, Christen (Hunter) Earnest and Reagan Reed. Great grandchildren Logan, Hunter, Cora and Ruby. Sister Cyndi Evetts (fiancé Jerry Bennett), brother Eddie (Vicki) Bohnenkamp, Steven Bohnenkamp, and John Bohnenkamp. Brother- in -law Ron (Diane) Clements, Thom (Debbie) Reed, Barry (Jessica) Reed. Many nieces, nephews, cousins and close friends. Grandma Sue adopted so many other kids that it is difficult to name them all. Everyone was treated as her favorite and she was always there for them. “Ring when you get home”