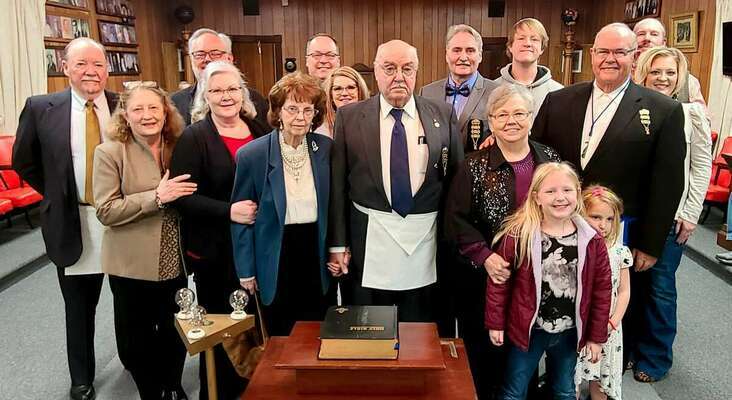 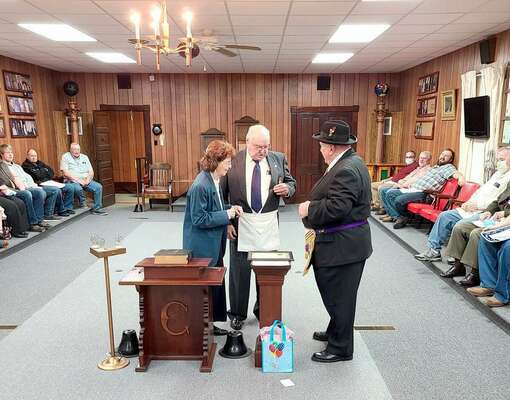 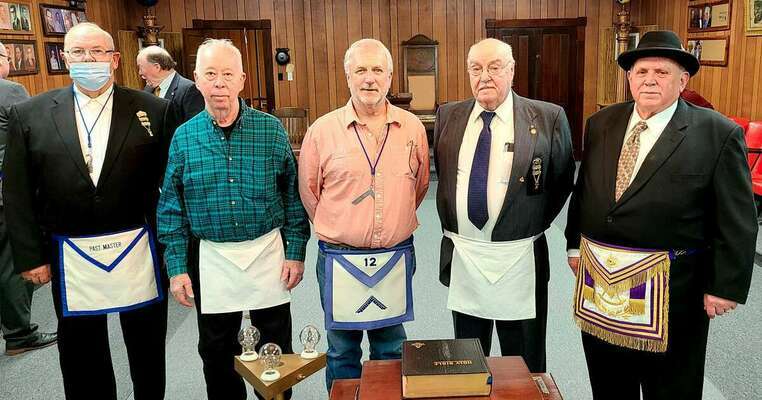 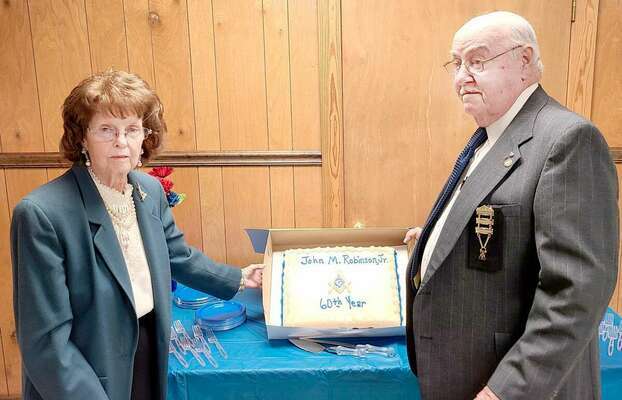 The evening started with a dinner in honor of John. He was accompanied by his wife Thelma Robinson, son & Tyro Secretary John M. Robinson, III, daughter and son-in-law Suzanne F. & Mike Kay of Farmington; brothers Paul W. Robinson and wife Rosemary of Jefferson City, RW Bro. Daniel T. & Pat Robinson of Caledonia, nephews RW Bro. Warren Robinson and wife Kim of Farmington, Daniel R. Robinson, wife Mande and their son Nate Robinson and daughters Elizabeth and Claudia Robinson of Potosi. A special cake and cookies had been made by Sweet Memories (Cindy Merx) for the occasion and special table arrangements by Jimbo’s Floral in Potosi.

Tyro Lodge’s Worshipful Master J. Joseph Tiefenauer hosted the open public ceremony with special duties of recognition by RW Bro. Francis Jett and RW Bro. Cecil Isaac of Potosi Lodge and RW Bro. Jett asked Tyro Lodge Secretary John M. Robinson, III to read aloud the Masonic history of Bro. John (Mac) Robinson, Jr.
Bro. John McClure (Mac) Robinson, Jr. was born on August 26, 1939 he started his Masonic service at Tyro Lodge No. 12 on November 21, 1960 as an Entered Apprentice, was promoted to Fellowcraft on December 31, 1960 and passed to the degree of Master Mason on January 28, 1961. Bro. Robinson marked his 50th year in Masonry in 2011. He is also a past member of the Tyro Order of the Eastern Star chapter. Bro. Robinson has served as Tiler and Chaplain for the lodge. Mac’s lineage in Tyro Lodge goes back to his 4x great grandfather Bro. James Robinson, who was a charter member and first Treasurer of the lodge in 1825 to his grandfather John Richard Robinson and his father John Robinson, Sr. All three of Mac’s biological brothers are members of Tyro Lodge; he and brothers Jim and Paul are all 50 plus year members.

Bro. John (Mac) Robinson and his wife were escorted to the alter by RW Bro. Cecil Isaac where he was presented with Grand Honors and his 60 year service pin and certificate. He was pinned by his wife Thelma Robinson.

John (Mac) offered his words of thanks to the brethren and his appreciation that had been extended to him and his family from Tyro Lodge and to RW Brothers Jett and Isaac for their part in the evening. Mac stated when he started masonry; these were the brothers he had chosen to be a part of and still enjoys it today.

The public portion of the recognition was concluded in prayer and everyone was dismissed. (Submitted Photos)